Gorden Wagener says that the new Mercedes-Benz SLC is the most iconic car the brand has, going back to the 300 SL.

Although it will not be present when the public enters the Paris Motor Show this weekend, Mercedes-Benz exhibited their new convertible at a special media event the night before the show's opening: a drop-top version of their audacious, overtly phallic, two-seat sports car. Mercedes-Benz design director Gorden Wagener said that originally they didn't plan to build this car.

The newest open-air Benz is fun, fast and – here's a surprise – affordable, certainly more so than you’d expect from the German car brand. $70,900 (excluding dealer and on-road costs) will get you behind the wheel of the 2017 Mercedes-Benz SLC, which is now rolling out to dealers. That’s a chunky $16,300 off the previous SLK 200 base model. Yet this mid-life makeover of the SLK – which now bears the SLC moniker, in a nod to its C-Class underpinnings – also adds plenty of features to the folding hardtop roadster to help it line up against rivals such as the BMW Z4 and Audi TT.

Standard kit across the SLC-Class range includes a nine-speed short-shifting automatic transmission, heated leather seats, a reversing camera, satellite navigation, a DAB+ digital radio and Apple CarPlay integration for the 7-inch display. The elongated signature bonnet gains a diamond radiator grille and revamped headlights, bookended by new bumpers and 18-inch alloy wheels. The folding metal roof can open and close at speeds up to 40km/h and gives the SLC a clear edge in the creature comfort stakes. For all its high-end appeal, there’s no mistaking that this is a car built for the joy of top-down driving. And there’s none of this 2+2 rigmarole – the SLC remains a proudly selfish two-seat tourer. 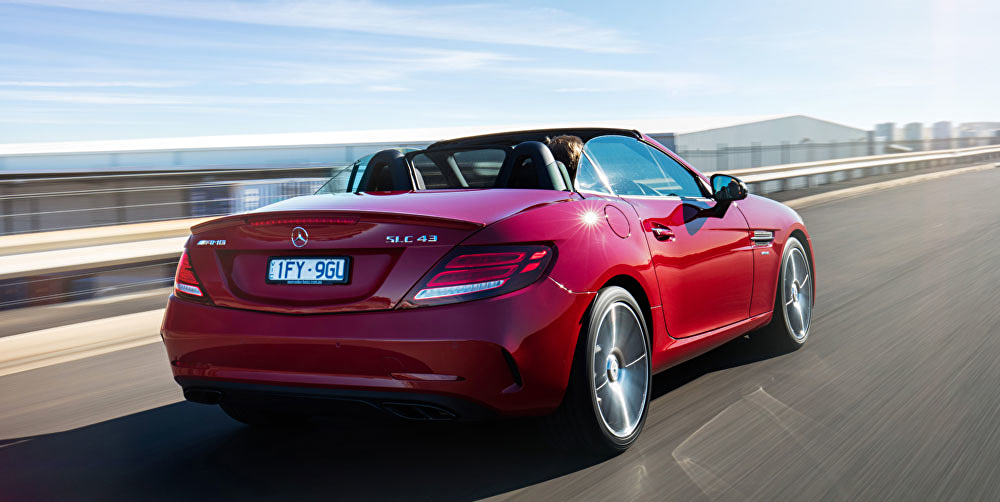 The Mercedes-Benz SLC family kicks off with the SLC 180, powered by a 1.6 litre turbocharged four-cylinder petrol engine, at $70,900, with the 2.0 litre SLC 200 variant at $83,855. At $99,855 the SLC 300 gains some eye-catching AMG influences in the wheels and body styling, alongside lowered sports suspension, keyless entry, cruise control and neck-level heating. And if you want to go all out, the AMG SLC 43 is your tempting entry point into the roadster world of AMG. $134,615 secures you a race-tuned 3.0 litre V6 twin-turbo engine plus AMG sports suspension, high-performance braking system and Nappa leather sports seats, mated to a panoramic sunroof and Harman Kardon surround sound system.